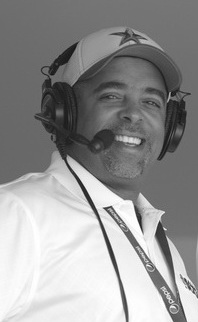 [Toronto, Ontario, Canada] – A former CIS Varsity Basketball player at York University and Assistant Coach with the University of Ottawa men’s program, Lance has played a number of sports at a high level including fastball as a member of the 2001 NAFA AA Champion Toronto Jaguars, Toronto Indians, Palermo Athletics, and Hamilton Hawks of the GHFL.

He began his broadcasting career at The Score Television Network before moving to Rogers TV and then an 8-year stint with CBC Sports as a Host, Reporter and Producer. A veteran of 20 plus years in the Sports media, Lance has been a part of 7 Olympic Games, 4 World Cups, and a host of other major sporting events. His most recent endeavor is with the newly formed Arena Lacrosse League set to debut in 2016.

This will be his 9th season with Ballpark Broadcasting, and listeners continue to enjoy his polished, easy-going delivery and players perspective in the booth.