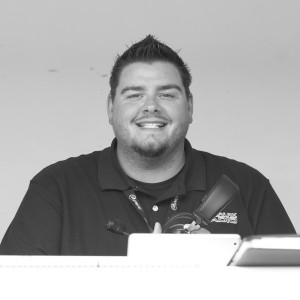 [ Ontario, Canada] – Kyle Smith – Hickson, Ontario, Canada
Kyle Smith, 32 years old and a graduate of the Radio Broadcasting program at Mohawk College in Hamilton, Ontario Canada, is in his 10th season with Ballpark Radio. A student of the game of fastball, Kyle can easily be found in any ballpark in Southwestern Ontario, whether it be while he is umpiring or just watching Kyle spends more time in the park then he does at home.

Kyle’s interests include Fastball, Hockey and anything outside. While watching sporting events on television he listens to the various play-by-play personalities to hone his craft after them. Kyle and his wife Candice currently reside in the metropolis with one flashing light, Hickson Ontario.

When asked for some thoughts on his time with Ballpark Radio, Smith had this to offer:
“It’s hard to believe that I have been working with Ballpark Radio for what is going to be my 10th season. I would like to take a quick moment and say thanks to everyone over the first 9 years that have made this as much fun as it has been Also a special thank you to Candice for her love and support when the games take me away from home.” Smith continued on to say “to the fans over the years, thank you for the e-mails as we bring the park to you at home. The e-mails make it worth the time at the park”