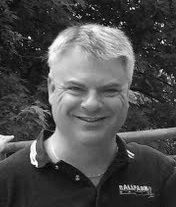 [Mississauga, Ontario, Canada] -Blair Setford began playing fastball at the age of 7 in Jordan, Ontario and, ever since then, the game has been a big part of his life. Since joining what is now the Golden Horseshoe Fastball League in 1994, he’s been a team rep, player/manager and league executive member.

Blair first partnered on air with Jim Flanagan in 2004 and has helped to grow the audience for the men’s game along with the rest of the Ballpark Broadcasting crew.

In addition to his administration duties in the game, Blair is on the coaching staff of one of the top-ranked club teams in men’s open level fastball.

Audience members enjoy Blair’s extensive knowledge of the players and the game, along with polished performances behind the mike.

Blair and his wife Monique and their two children, Benjamin and Natasha, live in Mississauga, Ontario.