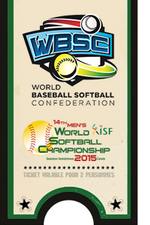 Live streaming video broadcasts will be offered for 50 of 65 games played over the 10 days of the championship. The broadcasts will be a joint venture between Sports Canada TV and Ballpark Broadcasting. Ballpark Broadcasting will provide the play by play and color commentary, while Sports Canada TV will provide the camera and production crew and technical expertise.

2015 is the second year in row hat Ballpark Broadcasting and Sports Canada TV will be teamed to deliver state of the art, high definition live streaming video broadcasts, of an ISF/ WBSC Championship to a world-wide audience.

In 2014 the two broadcasting concerns produced 54 live stream video broadcasts during the 10 days of the ISF Junior Men’s World Championship in Whitehorse. The quality of the broadcasts received rave reviews from a world-wide audience of over 80,000 views.

The in-the-booth broadcast crew of Ballpark Broadcasting at this event will feature a 5 man crew consisting of: Kyle Smith, Lance Winn, Joe Todd, Blair Setford and Jim Flanagan. The Ballpark Broadcast quintet has been together for the better part of a decade and has broadcast hundreds of games to softball fans around the world. The five brings years of experience and knowledge of the men’s international game to the booth.

Sports Canada TV will be headed up by producers Choyal Brown and Kat Britten, along with their camera crew of Adam Donnelly, Gillian Landrigan and Adam Yucker. In just a few short years Sport Canada TV has become the largest online amateur sports network in Canada.
Package Selection